Drawing on the Walls

This is a story of a woman who drew on the walls and the stove and the breadbox. Her name was Maud. And I fell in love with her spirit. 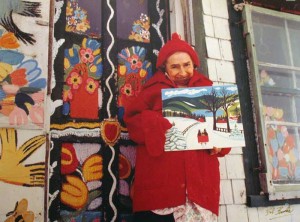 Folk artist Maud Lewis of Nova Scotia was a wee woman with such a great artistic spirit that her entire house has been preserved in the Art Gallery of Nova Scotia. The diminuitive dwelling doesn’t take up much space; it was only a 10 x 12 foot fisherman’s shack to begin with. Yet it was bursting with life when Maud lived there.

“Once this house was covered in tattoos.” That was the first line I wrote for my novel Maud’s House, after reading about Maud Lewis and seeing her artwork. Although my novel has nothing to do with Maud Lewis or her life, I hope it is imbued with her unquenchable desire to create. I couldn’t help but name my character Maud because she came to be as driven as the real Maud.

Pictures of Maud Lewis nearly always show her smiling and hiding her hands, which had begun to curl and become misshapen when she was 15. Her art is always joyful: brightly colored flowers, oxen with large curling eyelashes, glorious butterflies and birds. These were the things Maud saw from her window every day.

When I get stuck and consider complaining about how lousy the writing is going, I think of Maud and kick myself. She was a sickly orphan passed around from one poor relative to another until one day, in her thirties, she walked down the road from Digby to the isolated cabin of shy fish peddler Everett Lewis. Everett was impressed that his dog didn’t bark at their uninvited visitor. Apparently, Maud had passed some kind of test. Within weeks, they were married and living in their closet of a home.

Everett encouraged Maud’s love of painting and scrounged paints for his wife. Soon she was riding along on his fish route in the Model T selling hand-painted postcards—five for a quarter. In the 1940s, Maud put out a roadside sign, “Paintings for sale,” and began selling small paintings to tourists for $2.50. By the time she died in 1970, at the age of 67, her paintings were being shipped to collectors all over the world.

These are the things you should remember about Maud Lewis:

When she was creating her art, Maud Lewis escaped pain, poverty, and the Nova Scotia cold.

She proved that the creative spirit makes everything seem bigger—life, love, even a painted doll house with no insulation or running water.

Read about the drive to create in Maud Calhoun, the heroine of my book Maud’s House. We’re all artists in our own way.