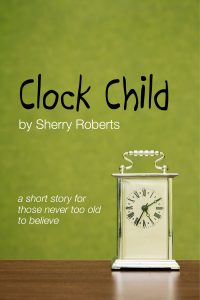 Dasha decided not to tell her son about the sock she found in the living room aquarium. She didn’t want a replay of the knitting needles fiasco, as she thought of it.

Last week, her son had opened the refrigerator to get one of the diet sodas she stocked just for him and found her knitting needles. “What are these doing here?” Sydney had asked. Sydney was an organized type and anything out of place immediately caused alarm. He’d given her that look she’d seen increasingly of late, that look that wondered if she was losing it.

She had laughed, grabbed one of the knitting needles, loaded it with two olives, and said, “For my five o’clock cocktail. They’ve gotten bigger.”

Sydney did not laugh.

“Maybe we should take another tour of Whispering Oaks,” he’d said instead. “They’d love to have a celebrity like you there.”

She didn’t say anything and Sydney left.

Now, she was scooping the sock, probably full of fish poop, from the tank and trying not to think about what the oaks whisper in the deaf ears of old people.

Dasha was five the first time her grandmother whispered the story of the Clock Child to her. “Every other generation or so, a Clock Child is born,” Namama told her as they laid in Dasha’s bed, side by side, their eyes on the moon snoozing in the corner of the skylight. “The child is human, but she can speak to the creatures of the Other World. She’s their link to our world, and they come to her in times of need.”

“What do they need?” Dasha asked softly, her hand creeping over to Namama’s.

“A sweater to keep warm, a wagon to carry their belongings. But mostly clocks.”

“But she’s only a child. What if she can’t get them what they want?”

Namama hesitated. “Once the Clock Child tried to trick them. She gave them a drawing of a clock instead of the real thing.”

A hush, as thick as a foot of snow, settled on the room. Dasha said softly, “What happened?”

“They played terrible tricks on her until she gave them the clock they wanted.”

Now Namama was long gone, the only thing left of her was a voice in Dasha’s head and the porcelain clock on her nightstand. Dasha had become famous for her children’s books about the Clock Child. The Clock Child stories had made her rich in money and in time pieces. People who didn’t even know her sent her clocks. Sydney grew up surrounded with objects counting time, probably why he went into the clock repair business or maybe it was his inclination for precision, for ordering life.

That night, lying in her bed, the sock dried and back in its drawer, Dasha listened to the house noises, trying to separate the same old creaks from new ones. The ticking of the clocks were like a heartbeat. She listened and noted that one chime was off; she would have to report that to Sydney.

When she’d told Birgit, her neighbor, about things moving around in her house, Birgit had a reasonable explanation: “Probably the Mischief Thief.”

Birgit nodded. “I’ve heard about a thief who steals nothing, just comes in at night and moves things from here to there. Slides a chair a few inches. Lines up cups in a different order. Takes a sweater from your sofa and hides it in the oven. Perhaps the Mischief Thief comes to your house.”

Birgit reads blogs about off-beat events and people like the Mischief Thief. She told Dasha when they first met, “I love the quirky.” Dasha thought the quirky was better than the senile.

When Dasha mentioned the Mischief Thief to Sydney, he said, “Mother, Birgit is a nutcase. You have a memory issue.” Thus all the talk about packing her clocks and hobbling through the automatic sliding doors of Whispering Oaks. In Dasha’s opinion, the doors of houses shouldn’t mysteriously slide open as you approached.

Dasha liked her house, with clocks ticking in the night and doors that opened with doorknobs. She did not want to leave it. No, it was better not to tell Sydney about the sock or her winter hat, the fake fur one that made her look so Russian, the one that ended up on the showerhead instead of the hook in the hall. Or how that heavy dictionary in her office came to rest under the kitchen table.

The clocks whispered to her, and Dasha fell asleep. In her dreams, there was a knock on the door. She answered it and said, “What do you want?”

“Your love and your clock,” said a voice.

“You always have my love, and I have many clocks.”

“The one you owe us,” said the voice.

She shook her head. “I don’t know what you mean.”

The voice said nothing, just went away.

When she woke, Dasha checked the time. But Namama’s clock was not there.

Looking down, she realized she’d worn yesterday’s clothes to bed, again. She didn’t like to do that. Sydney said Whispering Oaks made sure the residents changed their clothes every day. Pushing her body upright with a groan, she muttered, “Bully for Whispering Oaks. Now, where do you think that thief put the clock this time?”

She searched the house, but to no avail.

The only thing left of her Namama’s clock was a drawing, left by the front door. A drawing of a clock. It was signed in a child’s wobbly hand, “Dasha.”

The inspiration for this story was my two-year-old granddaughter and her fascination with clocks. She always helped her grandfather wind the clock, but one day it was gone, sent to the shop for repair. She was inconsolable until we drew her a clock on a piece of paper. She carried that paper clock around until the real one returned.