This is an excerpt from Warrior’s Revenge by Sherry Roberts. Enjoy. 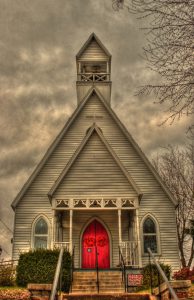 On the day Peter Jorn saw a ghost, shoes fell from the sky.

Cheap sandals, worn Doc Martins, ratty house slippers, dirty tennis shoes—lots of tennis shoes. “She’s crazy, always has been. Now she’s flinging shoes from the roof,” said the man next to me, a neighbor of the shoe tosser. Jorn and I were standing in a gathering crowd on the sidewalk in front of a group of brownstone apartments a block from the Minneapolis Institute of Art.

Watching from below as the police tried to calm the sobbing woman on the rooftop and disarm her of a particularly lethal-looking work boot, I asked the man, “Why is she doing this?”

“Lovers’ breakup,” he shrugged, as if love was no big deal even when it caused footwear to tumble from the heavens.

A woman in unflattering shorts and flip-flops, his wife perhaps, leaned around him and said, “Well, can you blame her? Breaking up by text.”

“Really?” I said, enjoying this treat of insider information but also horrified at such a tacky ending to a relationship.

Jorn, not the type to appreciate a tasty morsel of gossip, tugged on my arm. “Let’s go.”
My informant and I traded grins, then she lifted a shoulder philosophically and imparted a final piece of wisdom, “Love can unhinge us all.”

With one last glance toward the distraught woman being hustled off the roof by two police officers, Jorn and I walked to the museum. It was one-too-many-days-above-ninety-degrees in July, and it felt sublime to step inside the museum. Out of the heat and humidity that pressured us like an unseen but heavy hand, I wanted to wrap my arms around the tall, cool columns or lie down on the tile floors in a yoga Corpse Pose.
The calm of museums speaks to me, and the energies of creation fill me. I am truly my mother’s daughter. Evie, an artist, has dragged me to museums since before I could walk. She told me I saw my first Monet while swaddled in a sling strapped across her chest.

The exhibit I came to see this day was called “The Mourners: Tomb Sculptures from the Court of Burgundy.” When I asked Jorn to go with me, he said, “This isn’t some modern crap, is it?”

“Like someone leaning a bag of cat litter against the wall and calling it art.”

“These are masterpieces from medieval tombs.”

The Mourners are alabaster sculptures, ranging in height from ten to sixteen inches, all carved in various poses of grief. They were commissioned for the tomb of John the Fearless, whose nickname indicated his preference for battle over diplomacy. No stranger to the art of murder, John was ruthless in his pursuit of power and was himself assassinated on a bridge in 1419.

The four dukes of Burgundy, of which John the Fearless was one, loved luxury as much as they thirsted for power—which led them to commission art like what we saw before us, art timeless enough to travel through the centuries to a museum in Minneapolis. The exhibit occupied most of the wide hall on the museum’s second floor, and the large Sunday crowd stood two and three deep against the ropes protecting a long table. On the table were dozens of exquisitely rendered poses of medieval devotion—a procession of monks wringing hands, deacons drying tears, and bishops in solemn contemplation. The detail of the work blew me away; the artists had brought rock to life. “Incredible, isn’t it?” I said, admiring Mourner Number 78, his cowl hiding his shadowed face, his hand clutching a book painted red and gold.

Jorn wasn’t paying attention to me. He was studying something or someone across the hall. I raised my head to see what had captured his interest—and the next thing I knew Jorn was sprinting through the Asia exhibit. Of course, I had to follow.

Jorn appeared to have his sights on a tall man who was weaving in and out of the crowd, passing from one room to another. His stride was long and brisk. Wearing a hoodie, ragged jeans, and sandals, he could have been any of the art students I saw here regularly. At one point, he looked back, discovered Jorn still following him, and stepped up the pace. That brief glance didn’t tell me much. A hood pulled low, like Mourner Number 78’s, obscured his face, but I managed a glimpse of a black dreadlock whipping out from the hoodie’s edge.

We lost him in Africa then heard sandals slapping on the marble stairs. He had doubled back to the Mourners in the main gallery and was climbing to the third floor. As we raced up after him, I heard Jorn groan. He had begun to limp. His war wound was acting up. As his yoga teacher, I should have said something, but the look on his face stopped me.
My name is Maya Skye, and I teach yoga to people seeking inner peace and to people like Jorn whose peace has been shattered. A journalist, Jorn is a foreign correspondent trapped by doctor’s orders on domestic soil. In our short and sometimes prickly friendship, we’ve faced killers together and built a trust that thought nothing of careening around corners of valuable art together. We’re civil (most of the time), supportive (all of the time), and good about keeping each other out of the soup. If Jorn was interested in the fellow we were pursuing, so was I.

Hoodie rounded the corner into European art, and Jorn’s gait increased to a fast shuffle. We cut down a parallel hall, hoping to trap the man, but one of the guards busted us, “No running in the museum.” We nodded, did a fast walk out of sight, then picked up the pace again. Where was the guy? The maze of exhibit rooms, hallways, and alcoves was defeating us. We’d lost him. We made a loop of the third floor—from Van Gogh’s olive trees in Impressionism to some weird rooster sculpture in Folk Art and back again. Somehow Hoodie had slipped past us.
Pausing on a landing in the middle of the museum’s marble staircase, we scanned the crowd gathered around the Mourners below and fought to regain our breath. Jorn leaned over and massaged his thigh.

Jorn nodded. “You could say that.”

He straightened and looked at me. “I killed him.”

What happens next? Buy a copy of Warrior’s Revenge as well as Book One in the series, Down Dog Diary. If you can’t find my books in your local bookstore, ask for them. Ask your local library to carry my books in their collections. Thank you for being a reader and supporting not only my work but those of many authors.