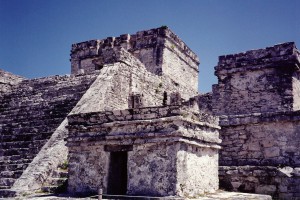 After a visit to Tulum, the Maya ruins on the coast of the Yucatan in Mexico, and hearing about the human sacrifices, I knew I had to name the heroine in my upcoming mystery, Maya Skye:

I am Maya Skye. I am named for a civilization that tracked celestial bodies without telescopes or computers, that built enormous and beautiful architecture, that developed a written language while others were still grunting. But they also cut out the still-beating hearts of young girls to appease the spirits and decapitated the losing team in sporting events. In some ways, I am very much like the Mayas: a bloodthirsty stargazer. This is a problem for one dedicated to enlightenment. I am a yoga teacher.

So you can imagine how excited I was when the Science 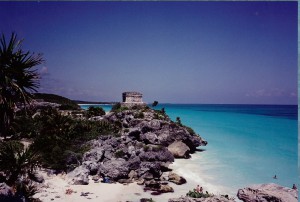 Museum of Minnesota opened its new exhibit, “Maya: Hidden Worlds Revealed.” An opportunity for research, I thought. What I didn’t realize was how much there was to appreciate about the Mayas and how much is just plain scary. Did you know:

1. Sure, the Mayas messed up on the whole end-of-the-world prediction in 2012, but you have to admire a population that trust their calendar so much that they have people whose job is to consult the ancient calendars and help you choose the perfect day for your wedding. They are called “daykeepers.”

2. The Mayas were patient, something we can all use a little more of in this I-want-it-now world. They used repetition and time to map the stars and construct their calendars. In other words, they looked at the sky and kept on looking.

3. The Mayas had no wheels, metal tools, or beasts of burden. They built all those amazing cities like Tulum, immense palaces, and temples that towered above the jungle on the backs of human labor.

4. They played some mean ball. Archeologists still haven’t figured out the rules of the Maya ball game. They just know that the Mayas built ball courts or long narrow spaces for games in nearly every city. The balls were made by wrapping strips of latex rubber over and over. They bounced very nicely and weighed eight pounds. Now, soccer players of today, imagine taking a header with an eight-pound orb of solid rubber. This is why the Maya ball players were heavily padded, resembling the Michelin man. They were tough guys. And don’t forget, losers didn’t last long. You lose the game; you lose your head.

5. The Maya ideal of beauty was a nose that meets the forehead in an unbroken line. Some nobles even wore removable nose pieces to achieve the “in” look. The Mayas also loved tattoos and to adorn their teeth. I imagine Maya dentists made a good living, drilling holes in people’s teeth and inserting precious gems. If you were of the noble class, you probably could afford to choose a jade decoration for your choppers. Jade was prized above all stones because it represented fertility, life, and rebirth. Still, no matter how rich or poor, whether you chose jade or some lesser stone, the beatification project was done without laughing gas or Novocaine. Ouch.

6. Whether we are trying to bring civilization to a jungle in Mexico or a corn field in Minnesota, there is an environmental price to pay. The Mayas burned about 1000 acres of forest to acquire the materials (limestone and wood) for each large structure they built. Their enormous buildings led to fewer trees, which led to soil erosion and less fertile fields in which to grow food. Deforestation affected the rainfall, which led to water shortages. Get where we’re going with this?

Human sacrifice and constant warring aside, the Mayas were a classy bunch. They had a fully developed written language before anyone else in pre-Columbia America, a language linguists are still puzzling over. They loved books and art and seemed to decorate every square inch of their massive structures.

It took me hours to go through the exhibit, and I just scratched the surface of a fascinating people who lived violent lives—when they weren’t gazing with awe at the stars.

Down Dog Diary is Maya’s first adventure. If you like some yoga with your mystery or vice versa, sign up for my newsletter. And check out Book Two in the series, Warrior’s Revenge, in which stargazing is interrupted by someone seeking revenge.